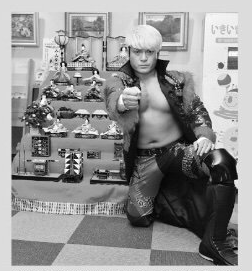 Q: This serial is recorded before the 10th March at Yokohama. The theme is...the isolation of the country of Noah.
KENOH: I think for a lot of people, hearing the word "isolation", gives a bad impression, and sounds somewhat insular. However, the isolation of the Edo* period gave rise to traditional arts and culture, and the produce of that is Japan's wonderful culture and technology is a result of the isolation of that period. It shows that you can build a culture on your own, without the influence of foreigners. That's the good part of "sakoku"*. It was possible for Japan to be isolated, because it is an island country. It was peaceful for 200 years, and thanks to that, it was possible to firmly establish a self sufficient economy, and since Japan was isolated and the basis of the country was well founded, overseas culture could be taken in well, as it was established. It was able to line up with the world powers.
Q: You graduated from the Faculty of Political Science and Economics of Meiji University, and have a middle and high school Social Studies teaching license.
KENOH: Japanese cars are said to be the best in the world. My Daihatsu "Miraisu" is the best in terms of fuel consumption.
Q: Like last time, your "Miraisu" has appeared again.
KENOH: It is likely that foreign cars will break soon. The Japanese are skillful, and their work is conscientious​. Its the same in Noah. The quality of matches in Noah, is the best in the industry. With the current strength, I am convinced that Japanese cars will eventually top the world. There is no need to compare us with other promotions. It would be nice if we would rise by ourselves. Because Marufuji went outside, while his eyes were fixed on Noah, he decided that a better fight would be born.
Q: He says, "if you want to see Marufuji, come to Noah".
KENOH: For an isolated Noah, the freelancers are like Dejima in Nagasaki*
Q: Is there anxiety about the freelancers currently participating in Noah?
KENOH: Kotaro Suzuki. In Noah, he and Yoshinari Ogawa are the GHC Junior Tag champions, they have tagged often. Isn't he is going to challenge for the World Junior in All Japan?
Q: In All Japan on the 19th March, he will challenge Iwamoto at Korakuen.
KENOH: Its interesting watching his matches. The match structure is good, the ability also so. The past of Noah that has to be defeated, is amazing. He won without even giving Hitoshi Kumano a right to a local tag match. How do I do it? How do I get it? Last year he participated in Noah and left his mark, and with all that momentum he was nominated by a champion in All Japan. There might have been a loss directly in a match, but for a champion, Kotaro Suzuki is a good flavor. Before that, what did the All Japan guys do?
Q: !
KENOH: Well, the level of the Noah juniors rise that way when they fight against Kotaro Suzuki, and that's fine if you acquire the culture you want.  Well, even if there is a policy of isolation, Kotaro Suzuki is one you want. If the Noah wrestlers are isolated, they will be buried by the professional wrestling world. I have to think carefully about the dumbass guys in Noah, and about myself too.
Q: Sure.
KENOH: Now, puro is in the age of New Japan. Others are in a chaotic situation. There are too many promotions to interact with each other, and it becomes a competition in production or self blame each week. This is a negative trend in the pro wrestling world. How many times can it be said that, "that wrestler has come out again?". Now and everywhere, what gave the group its color, is gone. It is too open. If the door is too wide open, the tariffs are absent, and for that reason its hard for me to get involved in other promotions and serve my own. A too open country without tariffs, will defeat professional wrestling promotions. I think you should make a story in your own. I enjoy wrestling at the same time as the story of it, because I think its fun. Paradoxically, if you are just opening the country, then sometimes you will be fighting against wrestlers from other groups, so if the story really is a policy, then it is a lot of points.
Q: It is unusual for you to positively affirm Noah's isolation policy at this time.
KENOH: Yes, well, I'm in the opening match, so I'm going to be humble in this serialization. Last year in Yokohama, I was the GHC Heavyweight champion, and I rivaled Kazuchika Okada being at the top of Noah, and now I am fighting the rookie Kinya Okada in the first match.
Q: That's right.
KENOH: From now on I have to see Kinya as a rival...from Kazuchika to Kinya, you must be stupid.

*Edo: Name given to the period of the closed country.

* Sakoku: literally "closed country" which was the policy of national isolation enacted by the Tokugawa shogunate​ which kept out outsiders and all outside influences.
The country had been through a civil war, and the shogun felt that the best way to eliminate all challenge to his rule and keep order was to close the country and eliminate all outside influences."Sakoku" lasted from 1633 - 1853 (over 220 years). All foreigners were expelled (or beheaded if they did not leave), no foreigners were allowed into Japan, and no Japanese living overseas were allowed back into the country. The only outsiders who the Japanese would trade with where the Dutch as they were interested in trade, and not colonization, conversion or Empire building. While technology might have ground to a halt (indeed when the Americans and their "Black Ships" forced their way in, the Japanese navy was hopelessly antiquated), but traditional arts and culture flourished in the hothouse atmosphere, leading to what is known as the "Edo" period. The period ended just after 1853 when the American commodore, Matthew Perry, sailed into Yokohama Harbor and told the Japanese they had to open the country to trade. In reality, the Americans were not interested in trade with Japan, whom they saw as a poor poverty stricken land, what they wanted was its natural resources, in particular its wood, coal and its metal, which made Japan a good place for their ships to refuel and repair before continuing to China.

* Dejima in Nagasaki: Literally "exit island". Nagasaki is a port city in southern Japan, which had a small artificial island created just off of it which was the only place that the Japanese would allow trade, and then only with the Dutch. For over 220 years, this was as far as anyone was allowed to enter Japan. They were kept on the perimeter, and never allowed on to the mainland.