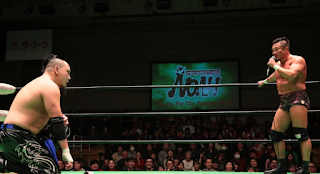 Q: How do you look back on the Korakuen Hall match on the 24th February?
SUGIURA: We probably won because the young guys (Yoshiki Inamura and Kinya Okada) tried to their best.

Q: Despite your opponents, The Hooligans being ruffians, I thought the match was straightforward, although quite a struggle. As a result, your team got the victory. Who do you think did particularly well?
SUGIURA: I think everyone worked hard, but especially did not Inamura and Masao Inoue?

Q: Who were the Hooligans that you saw?
SUGIURA: To be honest, the quality of their matches is low. To fight them is to waste time. As expected the heels will fight to lose, opponents like that do not suit me.

Q: As a result, the Hooligans dissolved. After the match KAZMA SAKAMOTO got on the microphone to express his own feelings from the position of a freelancer, and a single match was decided on for the Yokohama Cultural Gymnasium on March 10th. What was your impression of KAZMA?
SUGIURA: I think he has the best ability and eloquence in The Hooligans. I don't think they could function without KAZMA SAKAMOTO. I am experienced in outside and other groups, and I am evaluating him as a number one wrestler, so I think he can have a singles match with me. That is why I gave him Yokohama.

Q: KAZMA is the first one
SUGIURA: This is the first time I am looking forward to not having to fight a lot of other wrestlers. Oh, it feels good.

Q: You took the three counts with the Olympic Qualifying slam in the elimination, but KAZMA has said that, "I didn't give up".
SUGIURA: Okay, this time I will let you say that.