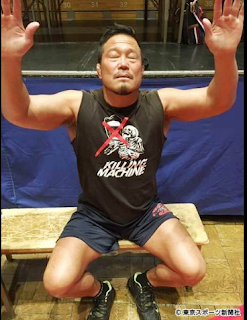 King Shame and Takura Sugiura (48) declared on the 14th that he would become of the core of the new era of Noah, despite his distrust of other people.

Alongside KAZMA SAKAMOTO (36) who he competes with after uniting in March for "Global Tag League", for some reason the former GHC champion, who has been joined by NOSAWA Rongai (42), has unwillingly been saddled with two ruffians.

Sugiura said, "Long time no see. I'm going after Kiyomiya only, what, did he forget about me? This is a company conspiracy. I will make the star wrestler a heel, and make it a springboard for a new Noah. It will be unbelievable to everyone...."
Sugiura was talking with his back to the reporter.

Furthermore, he agreed with Marufuji's words about "aiming at the second place in the industry".
"I have the feeling of strength for that. However, while there are many good looking teams, I will be a bad leader..."
The grumbling did not stop there.
"The power of the team is outstanding I think. If I win, will I become more influential? I will also change the new logo before it takes root, and my partner is a ... (word omitted due to language used).

However, deep in his heart there is a desire to stand at the top again, "I am strong when rejuvenated, as I have no walls. Even after the age of fifty I will be aiming for the championship, and for that reason I will win this time."

Today he won over the opponents of Atsushi Kotoge and Mitsuya Nagai.
Sugiura, who is facing the momentum of the team of Kiyomiya and Kenoh in an important match (17th Korakuen Hall), says "We are already the best contenders! Oh, I'm sorry, but can you leave your business card?"
He used sarcasm up until the end to the reporter he has a more than 20 years association with, and vanished into the darkness of Susukino*

*Adult entertainment district in Sapporo.
Please let this be the end of this article.