HITOSHI KUMANO
"My title match is soon, but for the last month The Backbreakers...we have lost too much? Ohara, what has happened? How are we going to raise the Noah juniors? I don't like this."

MOHAMMED YONE
(About Storm's absence) "It was just an accident. A quick way to the belt, its annoying. But, Storm is more frustrated in regards to this situation, and we will do the best again when we get the chance. First of all, please rest. We will carry on when you return. As a wrestler, I want to maintain the fighting spirit for as long as there is one, after all, it is impossible not to want it." 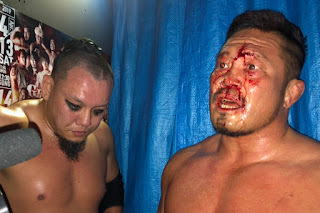 Q: You fought against Kotoge who you told not to, "be a running joke".
SUGIURA (Pointing to the bloody forehead): You can see it. A real fight, he can do it. Isn't it simple? For the running joke, this is about a "fight" (very rough)
Q: Still, Kotoge was prepared to push himself.
SUGIURA: I don't know. That is what he should do.
Q: You have won two wins in a row in the league?
SUGIURA: There is nothing to worry about.
KAZMA: I got the direct win, not Sugiura...does this show that I am trusted? What is? Anyway, I have shown what I can win with my own hands. Anyway, I am glad. (Rest does not translate)
Q: You face next Kenoh and Kiyomiya, who are the leading candidates for Korakuen.
SUGIURA: I'm sorry, who are the leading candidates?
Q: Kiyomiya & Kenoh
SUGIURA: Ahh?! Who are the winning candidates? I want to hear it! Say what team!
Q: Kiyo...
SUGIURA: Ah!
Q: Sugiura & KAZMA
SUGIURA: Is that right? Write it down like that, fool!
KAZMA: Listen! If they want to show a new view of Noah, we will show you what we can do with it! We will show them that they will not be the winners. 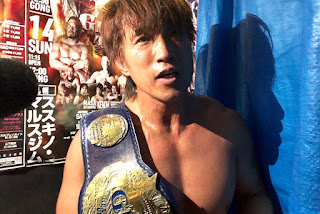 MINORU TANAKA
"The last junior heavyweight champion of the Heisei era, Minoru Tanaka. Actually today, 26 years ago, I focused on entering the Fujiwara group and getting started. It is my anniversary of my first steps in this world. April 14th. It was good to make a defense on this day. As for my opponent? It seems that he was tired after the title match, but after the junior tag championship at the end of March, I went to New York for sixteen hours, had three matches, and came back in 16 hours and had the title match today. I'm not tired. He is younger than me and has a younger career too, right? Don't apologize for it. Discipline, method and the height of awareness is different. Noah has the Junior League and the Junior Tag League, and I will be with Hi69 again this year. I will try once more and win again. Anyway, I will repeat having this belt many times, and each time I will make this "GHC JNR echo in the industry." But today was the last GHC Junior title match in Heisei. But, you know, I am a freelancer? We both are. All of the Noah juniors should watch it, and should feel something inside. It's funny. Send out it out if not. Everyone is too much of a gentleman. How much do the Noah Jnrs think they want this belt? How much do you want it? Bring it out. I am just one person, I cannot make it resound in the industry alone. I will lead as champion, but I need everyone's awareness to reform. You have to want more. Like Harada, the nature is for better or worse. Is everyone not frustrated? Is it not echoing in the industry? Harada will prove beyond certainty that the IWGP Jnr is a top world junior. That's all for today, lets finish this and move to the next step. Leave it all to Tanaka". 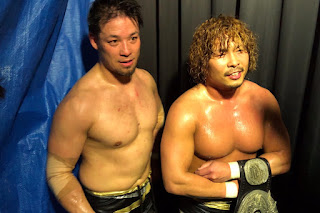 Q: It went to full time?
NAKAJIMA: As a result, "Noah is hot" isn't it? Even out of time, Noah is still hot.
SHIOZAKI: It is settled! (The rest of the answer does not translate, but I think he says something like he thought Kiyomiya was genuine)
Q: Kiyomiya and Kenoh are prepared to create a new landscape?
NAKAJIMA: It is easy, it is hard to do.
SHIOZAKI: They are our opponents aren't they? (rough)
NAKAJIMA: But as for you, answer yes or no, Noah is hot these days?
Q: Not again...
NAKAJIMA: I cannot hear you?
Q: Right...
NAKAJIMA: Right! And you also love Noah!?
Q: Yes
NAKAJIMA: You sound different!
Q: Uh huh
NAKAJIMA: Do you love hot Noah?
Q: Not again...
NAKAJIMA: And above all, you love AXIZ?
Q: Yes
NAKAJIMA: Oh my god! Your voice! Its the most important thing!
Q: Right...
NAKAJIMA: Keep your eyes on AXIZ from now on.