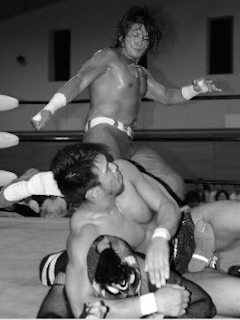 Q: There various people and various things in June
KENOH: First is Noah at Korakuen Hall on the 9th June, after a long time the event was overcrowded. I was pleased. The atmosphere was very good too. I never met Misawa, but I understand his greatness. It been ten years since he died, and everyone is captivated by him. Okay, lets make this weeks theme inheriting Misawa's genes*.
Q: Sounds good. How was the event itself? In the main event the GHC Heavyweight champion, Kaito Kiyomiya, defeated Takashi Sugiura.
KENOH: The main event was very interesting, and to that extent Sugiura having an impressive match with Kiyomiya is great. But, even after having watched the match, I knew Kiyomiya is still that manufactured champion. Only 10% of Kiyomiya was amazing...he barely won. The other 90% is Sugiura who has inherited the genes of Misawa. I think that Kiyomiya had a good match, but if you are satisfied by being raised by LIDET'S guy, then that is the end of him. From now on, I will praise LIDET for pushing Kiyomiya so strongly, and take advantage of perseverance, and take the belt. Now, no one has expressed a challenge?
Q: Go Shiozaki, who defeated Naomichi Marufuji in the semi at Korakuen, surely is first on the list as challenger? He is one of the people who has inherited Misawa's genes?

KENOH: It didn't surface during that match. It was a good feeling though as wrestler chairman*  when President Sato of The Leave came to the ring, Noah have been indebted to them for a long time, but he spoke on the mic for too long. I often say that if you speak on the microphone for too long, then there is more content than the person speaking. After you have finished speaking, quickly get out.
Q: As unsparing as ever.
KENOH: Anyway, recently Noah have been saying, "Number one in Japan, Noah number one in the world", they are saying it too much. Did LIDET tell them to say that? Those dogs! There is no originality! There is a sense of crisis. Well, about Noah, Misawa's genes have impacted the wrestling world.
Q: Atsushi Aoki passed away.


KENOH: It's really shocking. I mean I'm shocked, but he and Taniguchi came to Noah together, Taniguchi's sadness is immeasurable. Truth is, life ends, and when this happens I always think that you need to live a life without regrets. I cannot waste my life, not for even a second, and I have to do that 24 hours a day and 365 days a year...and at last, that man has returned.
Q: KENTA.
KENOH: The reason for his choosing New Japan is that it "equals the world", certainly, the current Noah may not be "world class", but I have to make Noah an option for him.
Q: Did you want him to come to Noah?
KENOH: I heard that he did not renew his contract with WWE, and I was convinced that he was coming back to Noah. He is being selfish, his home is Noah. His home is not New Japan! What do Marufuji and Sugiura think about it?
Q: Marufuji said on Twitter, "Do your best, and don't you dare be buried!"
KENOH: Well, Marufuji will say anything to be popular. Why else is he supporting him? I wonder if Noah are ignoring this? Noah need to say more. Now, Noah fans have complicated feelings. Personally, I am motivated that KENTA went to New Japan. I am grateful to him. Even if KENTA does not come to Noah, I will take Noah to further heights.
Q: That is strong (rough)
KENOH: Speaking of New Japan, he said "it is one of the best in the world". Well, how does Noah look to KENTA now? He carried Noah on his back, and worked in rebuilding it, and after that he went to WWE. At that time KENTA revolted against the organization, and not just the opponent in front of him, but also various other things, and the assholes supported him. I respect that. Noah fell again when he left.
Q: Now, it finally shows signs of life again.
KENOH: A long time ago when you spoke of puroresu, it was Noah. From now on, I will spend every moment making KENTA regret he chose New Japan, and I will make Noah a world-class puroresu company!

* Rather than any kind of biological inheritance, this more means that it's an inheritance of his thoughts, his wishes, his drive and his beliefs.
* Go Shiozaki is president of the Noah Wrestlers Association.