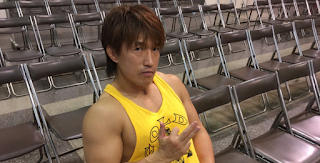 Q: "Global Junior League 2019" is about to begin, and this time you will enter as GHC Junior Heavyweight Champion. Please let us know your present state.
TANAKA: I won the belt on March 10th, and made one defense in April, but soon after that there were no more defenses as Global Junior Tag and Global Junior League began, and under those circumstances I could not defend, so I was in a situation where I could not evolve. In my experience, I knew that there was nothing I could do about the belt and I wasn't going to get stuck on it, so I concentrated on Junior Tag League. After all, as the single champion in the single league, the outcome remains (the rest does not translate well, but I think he basically says he wants to enter and leave as the best)

Q: As you are the champion, there is never a time when it is not said that every match is good.
TANAKA: The single champion is the strongest, and in the first place I have to show this, so I want to go up as the very best.

Q: You have been entered into A block. I would like to ask about the other entrants, the first is Junta Miyawaki.
TANAKA: When I entered Noah he was a trainee, but he came storming from there into the juniors, and in the last Junior Tag League, and frustratingly he took his first victory over myself and Hi69, but hasn't he grown fast? The other day when he was competing in my independent show, and I wanted him to seize something, but he has grown to such an extent that it is not necessary.
Q: Certainly there was a large "Junta" call at the venue.
TANAKA: Yes. I am looking forward to the singles.

Q: Continuing on, last year's runner up, YO-HEY
TANAKA: We clashed in last years league, and I lost in the main event at Kochi. There is also the loss at Junior Tag League at Korakuen Hall, I want to win (rough).
Q: It also means that losing there has made an impression
TANAKA: That's right. I don't know what the match order is, but I think I have to bring him down. YO-HEY is also a very good wrestler.

Q: And Tadasuke, who is also in RATELS, the same as YO-HEY.
TANAKA: The tension is high, isn't it? Does the tension make him get stronger suddenly? Maybe it is not as it is said, but I am thinking that either the problem is settled, or a mistake is made.

Q: Next Daisuke Harada, the former GHC and the current IPW Junior Heavyweight Champion?
TANAKA: We had a match in Yokohama in March, the Noah juniors and the juniors I have wrestled against in various promotions are amazing. There are a lot of wrestlers who are highly skilled, but there aren't too many who are self assertive. Everyone has an opinion about the Noah juniors or about the belt, but its an opinion that isn't put out too much. But, Harada will speak bluntly about it, regardless of merit. I think that part is the very best, and the height of awareness towards the Noah Jnrs is a great idea. After all, I, a freelancer, took the belt which is at the top of the Noah juniors. I don't think he is out for revenge, and neither do I think he is going to be so calm, but he will aim at the right to challenge for the belt again, he will come for my neck and I cannot afford to be off guard. I don't know what he will be like, but it would be good to win after being able to make an exciting match in Tokorozawa, going crazy in the match.

Q: Finally, the current GHC Junior Tag Champion, Yoshinari Ogawa. This is the second time for the first time in four years, and it gives the impression that the Jnr Heavyweight leaders in Noah are waiting until the time is right. This will be your first singles with Ogawa, right?
TANAKA: Yes! This is the first time, and I am looking forward to the singles. There was also a time when I teamed with Ogawa, and I wondered if I would like to make a unit together.
Q: It was "SPECIAL4" of Tanaka, Ogawa, Hi69 and Seiya Morohashi.
TANAKA: I think all things have a meaning. Morohashi was enthusiastic to join, and decided the name "SPECIAL4", but then Ogawa left and it was just the three of us, but we kept it as "SPECIAL4". I think that ultimately it was something that makes sense in the end, so I don't feel that Ogawa betrayed us, I think this result is the best. I think Ogawa wanted to do something like "STINGER", but neither myself, Hi69 or Morohashi would have fitted into that, I think it was for the best, and so I don't feel resentment. My respect for Ogawa's pro-wrestling skills will never change. My own career is with Pro Wrestling Fujiwara Gumi and Battlarts, but I have not yet touched on Giant Baba. So, I am very interested in the technology of those who were taught Giant Baba's wrestling. When I was competing in All Japan in the past, I was very interested in Akiyama's teaching of the trainees. Now, seeing what Ogawa does, it looks very similar to Akiyama's teaching method. It is interesting. Even though I have had matches with Ogawa, there are a lot of interesting skills to learn, and I am looking forward to the singles.

Q: It may be a bit ahead of time, but is there anyone who you are interested in who is in B Block?
TANAKA: Typically, it is Hi69.
Q: It seems that your partner, Hi69, is also enthusiastic. What if the winning match was Minoru Tanaka vs Hi69?
TANAKA: That's right. It is the ideal.

Q: However, Kotaro Suzuki, who won last year, is also in B Block?
TANAKA: I have wrestled Kotaro many times during All Japan era, and in April in Sapporo I wasn't at my best due to injuries, but I want to do my best in each match. It may be a bit soon to say it now, but the schedule is arranged in my head, and so I want to see you Hi69. I want to make Hi69 vs Minoru Tanaka a reality.

Q: You are currently partnering with Hi69, but it is inevitable that it is inevitable that he will aim for the belt.
TANAKA: He may already be aiming at it in his heart. It doesn't need to be said, he may also be planning a sneak attack.
Q: In that case each situation is easy to understand, a lot may come out in this league.
TANAKA: That's right. I think that this is a good opportunity for the Noah Jnrs to share what is hidden in their hearts. It is a good opportunity because everyone has been so quiet.

Q: Finally, what are your feelings?
TANAKA: I am entering as the 39th generation GHC Junior Heavyweight champion, and I have always said since there is a vision to make the GHC Juniors resound in the industry, leave it to Minoru Tanaka! 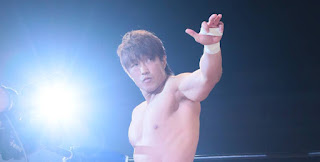 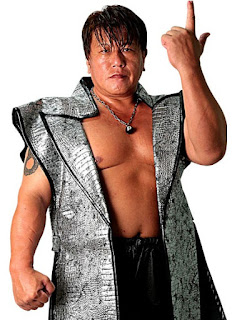