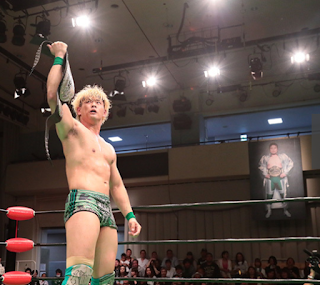 On June 9th, the number of visitors to Pro Wrestling Noah's Korakuen Hall event, was announced as "1,710 people" (overcrowded capacity).
For the last few years, the subject of Noah beyond the ring has been noticeable, (including negativity), but currently under the new company the system is being changed and they are making steady progress towards "restoration".
The leading figure in this is Kaito Kiyomiya, the current GHC Heavyweight champion.
Born in July 1996, he is still only 22 years old, and Noah has been changed by the champion who has said, "new wrestlers gather new fans" (rough).

Before that, there was a brutal glamor in the conflict with the Suzuki Army led by Minoru Suzuki, into which Kiyomiya bought an an overwhelming brightness and airiness.

"I have realized that the number of women and children customers have increased", Kiyomiya says, "even in rural areas people often say, "I came to see you for the first time".

His career, of only about three and a half years, is still young.
Therefore although he is sometimes still awkward, it is why his passion shines. Although young, Kiyomiya sees youth as being on his side as it is something that adds to the appeal of the "newborn Noah". It can be said that the young champion competing against the veterans and the mid-level powerhouses for the first time, has made him more prominent.

Kiyomiya is both an innovator and a successor.
In his childhood he adored Mitsuharu Misawa. The costume he uses is the same green, and his uses the Tiger Suplex as his finishing move.

On the 9th June, Noah held a memorial event for commemorate the ten years following Misawa's death.
"The person who wins the main event, will pull Noah".
The opponent he fought for that resolution was Takashi Sugiura, who has held the GHC Heavyweight four times in the past, and who has also achieved success in the other belts. He is a master wrestler who is 49, in the midst of a heyay, and a man who knew "Misawa's Noah."
Although he is the same age as his mother, Kiyomiya says "he is a monster".

The 4th defense of the 32nd champion, has become more noticable with the attacking power of the challenger; innumerable elbows, and the "avalanche type" brainbuster eas also ised. In a long match of over 30 minutes, Kiyomiya was attacked, endured and repulsed him with a roar.

"This match is Noah"

When we talked the day after the last victory with the Tiger Suplex, Kiyomiya met my eyes and said, "I was concentrating more than usual at the Misawa Memorial event, and I was able to go beyond my limit. The fight for the GHC is beyond a "fight to the death", and I wanted to see if I could go there, into the domain which no one can imagine".

The hearts of the audience were moved by the intensity of "are you going there", their reaction also raised the limit with such a connection to, "I feel that this match was Noah".

The aesthetics of "receive, receive, and then return it twice"

However, he himself does not use many dangerous skills.

"Drop kicks and German suplexes. I want to cherish the techniques I have been using sice I was young."

Kiyomiya says that "Receiving" is the root of Noah's wrestling, and for this passiveness, Noah is proud that it has not lost out to any other promotion.

"I think the fight will be fierce because of how it is received, and that intensity will lead to beauty. It is possible to have a long match with it, and because the passivity is solid, it minimizes shocks."
Even in past title defenses, Kiyomiya has often turned to this, and it should come as no surprise for a wrestler whose opponents careers are manifold. "Receive, receive, and then return it twice" is his own character, and he thinks he will not change it throughout his life as a wrestler, even if he has to repeat it many times.

"The fun thing about Puroresu, is when you are doing it. Even when you return it, damage can be reduced depending on how you receive it. When you attack, the cheering comes from the fans. That is my strength, and fighting back is the best wrestling I can think of."

It is safe to leave Kiyomiya to Noah

Kiyomiya, who overtook several seniors and wound the belt after "skipping a grade", and in this situation is it not unnatural that the company had charged him with a heavy ability, that does not match his ability. He is not only the champion, he also has an unwavering pro-wrestling stance, of "Noahism" so to speak.
Of course, he is not ready yet, so it is not too much a big deal, but he says "it is okay to leave it, even if you do, it is an unintentional existence" (rough).

The annual Mitsuharu Misawa memorial is something that makes you feel Noah's rich past. But ten years after losing the great man, Kaito Kiyomiya has presented to the fans the future as the successor of Noah.
Everyone has been waiting for this day.

I want to have faith in his direct words.