It cannot be denied that the venue is a beautiful one; a beautiful plaza, a beautiful light and airy reception, and a wonderful hall...but for the Noah ring crew, this venue is the bane of their existence. Home to what they have termed "The Demon Staircase from Hell" as the truck cannot be parked in a loading bay, all the ring equipment has to be carried up and down the long stairway, across the plaza and through the lobby. 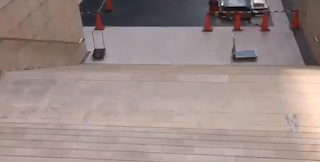 Unfortunately after Noah's Korakuen Hall event, it was announced that due to a form of dislocation in his shoulder, Go Shiozaki will miss time. Noah have tentatively announced it as being today, but it is unknown how long he will be out for, and sadly it leaves both the GHC Heavyweight Tag and the match with Hideki Suzuki up in the air.

Mohammed Yone's group of middle aged to elderly ladies attended the venue today in their "YONE KIKS" t-shirts. Last time they were seen they were named "The Tadasuke women", as Tadasuke tried to impress them with his might. Minoru Tanaka joked that he sprained his ankle being distracted by them.

Daisuke Harada (in a foul mood and wearing his "shark smells blood face") came stalking out looking very angry (and with a small bandage). Junta Miyawaki (who has new music) put up a good fight against him, and almost got the three count at various points, but he could not prevail.

Daisuke Harada stalked off without even waiting for his arm to be raised in victory, and Junta Miyawaki was positive about the loss, writing that tomorrow he would win. Against Yoshinari Ogawa.
Yes. Junta. 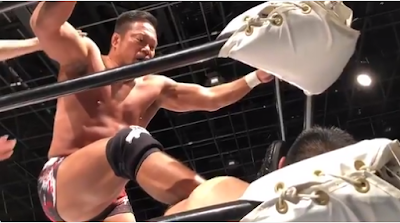 Usual bumbling antics from MASAO WORLD today, especially when he tried to dive at Takashi Sugiura from the ropes. Slipped, and after having Sugiura's boot on his face, got whacked on the head by him and asked, "What are you doing?"
Okada put up a good fight against KAZMA, kicking out at two at the kick, but then falling at three. 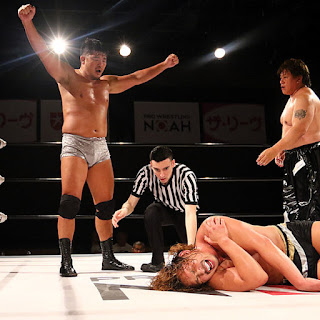 Katsuhiko Nakajima came out to the match carrying both belts (the situation is sadly up in the air as to whether Shiozaki will be well enough to defend them), and he also came out to AXIZ music too.
Minoru Tanaka had fun in this very rare partnership with Nakajima, as they both did the rope grin thing on Akitoshi Saito (although Nakajima looked a lot more sinister).

Shuhei Taniguchi has started now to come into his own, and he took the win today with the modified camel lock on Katsuhiko Nakajima. Nakajima rolled on the mat afterwards clutching his shoulder, making Taniguchi say sarcastically on Twitter afterwards that he wanted to know how Shiozaki was, and how he wondered if they both were ready for the 21st....

Despite the loss (and the shoulder which he had an ice pack on originally), there was tension between Nakajima and Taniguchi after the match, the two had to be held back by Referee Ben (who seemed to spend a lot of the night breaking up fights) and Minoru Tanaka. 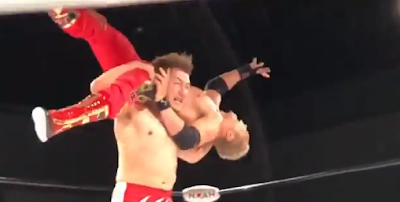 Interesting match between two Noah born, Noah's eldest son (who had a slightly swollen right eye thanks to HAYATA) and Noah's growing bear, in which Suzuki went for a handspring off the ropes and was caught on Kumano's shoulders which turned into the Argentina Backbreaker. 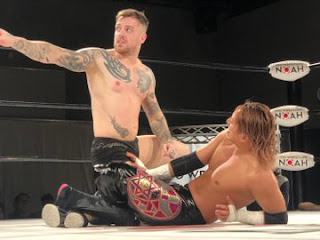 After yesterdays bloodbath with Daisuke Harada, Yoshinari Ogawa was bandaged today (and it was a big one).
Daisuke Harada (not in a good mood all evening) came out to second the other three in RATELS (Suzuki seconded Stinger, but didn't get involved), and this naturally led to friction with Ogawa, who decided to wind Harada up by provoking him.
Chris Ridgeway tortured HAYATA'S legs, and it must be said that HAYATA is becoming more resilient to submission moves.

There was the usual Stinger vs RATELS brawl which went outside the ring, and Referee Ben got knocked over by a fighting Chris Ridgeway and Tadasuke.

After the match, the tension between Harada and Ogawa exploded, with Harada storming into the ring to attack Ogawa and be pulled away by RATELS and Junta Miyawaki. When a now shirtless Harada was made to leave the ring, Yoshinari Ogawa stood and watched by the nearest turnbuckle, with Ridgeway looking on. 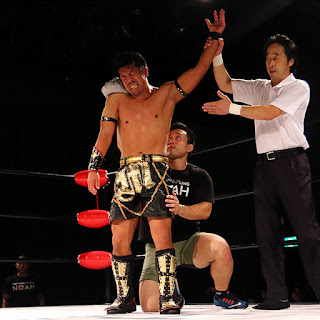 Hajime Ohara has his neck and shoulder taped today, and was not in a good way after the match, the Mui Bien clutch seemingly exacerbating the condition. Ohara has suffered like this before, especially during 2018's Global Junior Tag League when a tearful Hitoshi Kumano had to roll him out of the ring.
The referee was concerned about Ohara too, and following a particularly painful body-slam, asked him if he wanted to stop the match, but Ohara refused. 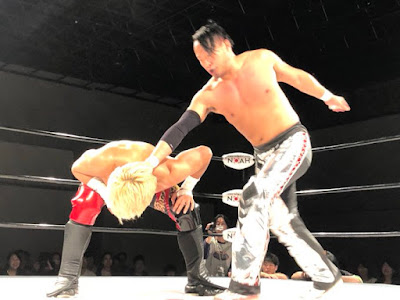 The jackets of Kaito Kiyomiya and AXIZ are notorious for shedding their feathers, and it is a backstage joke in Noah that the dressing room, the waiting room and the entryway always have them on scattered the floor. In the ring today, Naomichi Marufuji scooped them up and blew them from the palm of his hand outside the ring. Marufuji was also menaced by Kongoh when he got into the ring, he just grinned (I'm amazed that Kenoh hasn't started screaming about him wearing silver and black which are LIDET'S colors). Despite this hostility, the two people with the least beef between each other, Atsushi Kotoge and Kaito Kiyomiya, started the match.

Parts of the match went outside the ring with Inamura trying to take on Marufuji.
Kenoh no sold the Kawada Kicks (Kawada probably would have erupted in fury had it happened to him).

Match ended in a huge melee, with everyone fighting each other in various places. I think the ref just gave up and concentrated on what was going on in the ring.

After the match, Kenoh got on the microphone and after the usual rant about "company dogs", and how Kiyomiya is "loved by the parent company, LIDET", Kenoh spoke about the N-1 and how he would participate and how he would win in the main event at Sumo Hall.
Kaito Kiyomiya later posted on Twitter that he would do everything he could to ensure that he faced Kenoh in the main event.