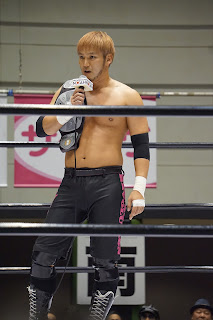 WINNER OF A SIX MAN
IPW announced on the 30th October 2019 that the challenger for the IPW Junior Heavyweight title would be determined on Sunday 15th December at UNDISPUTED III at Maidstone Leisure Center in England. The challenger will be the winner of the six way match. Participants are yet to be announced.
The winner will have the choice to either fly to Japan and face Atsushi Kotoge in Noah, or he will have the right to demand that Atsushi Kotoge come to England and face the challenger in an IPW ring. The only stipulation is that the winner has ninety days in which to decide what he wants to do. 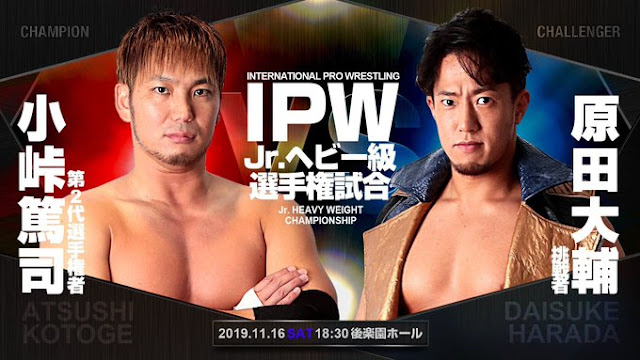 vs DAISUKE HARADA
Following their defeat for the GHC Junior Tag Titles by Daisuke Harada and Tadasuke at "NOAH THE BEST" (Sumo Hall, 2nd November 2019), at Noah's fall out show in Osaka on the 9th November at the Osaka Edion Arena 2nd Stadium, Kotaro Suzuki asked for another shot at the titles, but this time it would be with a different partner. Citing that Yoshinari Ogawa is currently suffering shoulder problems and therefore would not be up to a title challenge, Suzuki said that he would be challenging with Atsushi Kotoge.
Daisuke Harada accepted their challenge, but he had one stipulation of his own. If he was going to grant the hated STINGER another title shot, then he wanted a shot at regaining the IPW Junior Heavyweight too. Atsushi Kotoge accepted, and the match has been set for the 16th November at Korakuen Hall. Kotoge has commented on it that there can be no happy ending between himself and Daisuke Harada.


The two Osaka boys and former friends, held an epic match at Korakuen Hall.
A slight disappointment to the match was that the night before IPW had announced that they were holding their heavyweight championship for the last time in December 2019 as the company would no longer be holding live events. At the time of writing they have not announced what will become of either the six man rumble or the IPW Junior Heavyweight (or definitively what will become of IPW), so essentially both Kotoge and Harada were fighting for an empty title. If you put the sad news about IPW and the issues surrounding the future of the belt aside, this works as not only a grudge match, but an excellent showcase of the Noah juniors. The depth of emotion and the aesthetic of the wrestling displayed in this match is what has saved it from what otherwise would have been an empty and pointless title match.