Kiyomiya "I received "a harsh cheer" from Mutoh, "Are you trying too hard?" 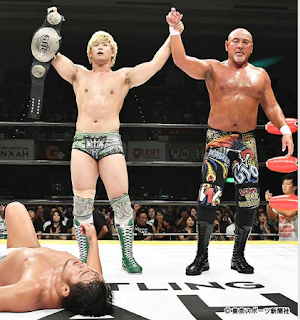 On November 2nd at Sumo Hall, the GHC Heavyweight Champion, Kaito Kiyomiya (23) will make his sixth defense against Kenoh (34). On the 2nd he vowed to resume the defense.
He has become a pillar of the new Noah following his capturing of the belt in December last year, but the other day there was an act that threatened to break the fighting spirit. It came from "that guy" who sent an honest word to the young treasure of the industry.

Kiyomiya will have the final battle of the "N-1 Victory" league match at Sumo Hall, and he has taken the advantage by introducing the new stretch face lock as soon as possible.
"I have to show what I did during the non participation of the "N-1". I have been thinking a lot about Sumo Hall. I want to go to Toshiaki Kawada to improve that skill."
He has gained experience as he didn't participate in the league.

At the Osaka tournament on the 16th of last month (September 2019), the first match with Keiji Mutoh (56) of W-1 and Jun Akiyama (49) was arranged.
"It felt like everyone was aiming for the core, or at least the match was a core effort." He was inspired by the strength of two people, who have not faded despite stacked careers.

What impressed him most was Mutoh's words. Although he received high acclaim during the face to face interview backstage, after the event it was said that it was pointed out to him by the person concerned that, "I feel like you are trying too hard."
He gave no advice before the match aside from "do your best", but he was watching.

Kiyomiya said, "I think he means that I am overreaching. Maybe I have lost sight of some things. Of course my confidence came out, but I am still young." He took Mutoh's advice seriously.
Mutoh of course left this "dry cheer", because he feels the growth of the young champion.

"Because it was an unforgettable experience, it doesn't end there. I want to show you what has happened from there. First of all, I want to show Kaito Kiyomiya's professional wrestling at Sumo Hall, which I want to connect to Noah's progress."
This time, without hesitation, he is looking ahead to the day when he competes with the big names of the industry, to achieve further growth as a champion.