Riki Choshu appears on Noah's screen...announcement of the GHC National Championship. Decisive match between Sugiura and Elgin on 2nd November. 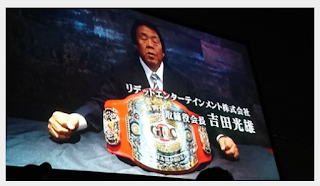 Pro Wrestling Noah announced on October 3rd at Korakuen Hall, that it as a newly established GHC National Championship.
Riki Choshu (67) who wrestled his second retirement match in June this year, appeared. Choshu (who appeared on the screen as "Director Chairman of LIDET Entertainment" with his real name "Mitsuo Yoshida"), announced the establishment of the new championship, and the participants who will compete for the new belt.
He announced that on the 2nd November at Sumo Hall, Takashi Sugiura and Michael Elgin, will compete to be the first champion.

In addition, the opening match of the 2nd November Sumo Hall Tournament will be Akitoshi Saito and Masao Inoue vs Mitsuo Momota and Tamon Honda. It was also announced that Mighty Inoue would return to referee the match. In addition, both Eddie Edwards and Super Crazy have been announced to participate at Sumo Hall.