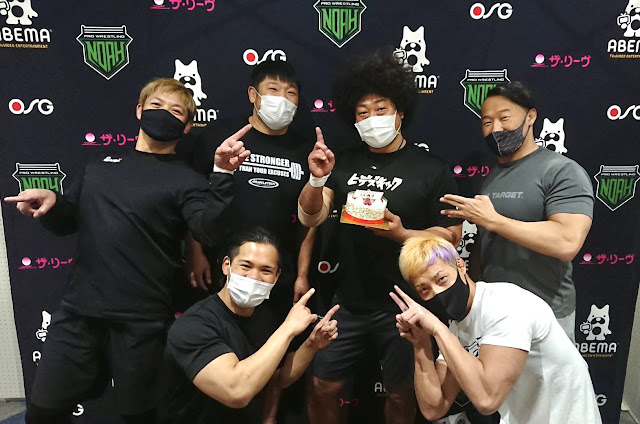 Mohammed Yone celebrated his 45th birthday today, and was given a cake by some of the roster to celebrate. Normally, he would have been given gifts by fans too, and probably presented with flowers in the ring, but sadly the COVID-19 pandemic has ruled this out.
The arena had notoriously low ceilings (anyone who went on to the top turnbuckle, such as Atsushi Kotoge), had a hard time as they had to fight the roof as well as their opponent. Outside a cold wind was blowing (Referee Fukuda, who is from Maebashi, said it was the "Akagi", which are the cold winds that come down from the mountains) but nice weather.
It's rare that we hear referee banter, but Shu Nishinaga (Noah's senior referee) teased him that he was feared like a "black panther" of Joshu (Joshu Hotakayama, which is one of the "100 Famous Japanese Mountains", and the highest in the region...or else he is referring to Fukuda's prowess as a fisherman), Fukuda said "I am not "The Black Panther of Joshu", Nishinaga said he was. Ryu Nakata had told him so.
Junta Miyawaki made his return to seconding duties, but not to the ring. He is looking well, but is not looking as chiseled as he was when he came back from shoulder injury.
Fans were very much anticipating the Kinya Okada vs Takashi Sugiura singles match. They also came away wanting to see Yoshiki Inamura vs Masa Kitamiya.
The event will be shown on WrestleUniverse on Friday 26th February 2021. You must be a subscriber to access this service.
MATCH ONE
YO-HEY vs Yasutaka Yano
YO-HEY was looking very purple today, and he also had a red tongue. Enthusiastic as ever, YO-HEY was encouraging of Yasutaka Yano, and clapped his moves.
WINNER: YO-HEY with a Dropkick (8 minutes, 4 seconds)
MATCH TWO
Takashi Sugiura vs Kinya Okada
"The singles match you want to see in a league"
Match was said to be amazing, and fans thought it should have been higher up on the card.
WINNER: Takashi Sugiura with the Boston Crab (12 minutes, 17 seconds)

MATCH THREE
STINGER (Yoshinari Ogawa, HAYATA & Susumu) vs The Kongoh Juniors (Haoh, Nioh & Tadasuke)
Now that he's done (for now) irritating STINGER, NOSAWA has now turned his attention to Tadasuke, who he is convinced after the sunglasses stare down they had in Sendai on the 21st, that Tadasuke (with blonde hair and shades) is copying his style, and so he appeared at ringside to wind him up. It should be noted that NOSAWA was not in the match, or even on the card, and as this is the Noah Juniors, a fight broke out between them, and then rather than attack each other, five Noah juniors just stood and watched. NOSAWA has a way of appearing from thin air, and a fan even said that they were looking at their phone for only a second, and when they looked up, he had materialized on the ring apron.
STINGER (a team not noted for their sense of humor), thought it was funny, Yoshinari Ogawa looked as if he was trying not to laugh, and even HAYATA was smiling. After so long of being plagued by NOSAWA, they found it refreshing that someone else was being irritated by him.
WINNER: Susumu with the Front Crash on Haoh (16 minutes, 7 seconds)
Fans want to see a Susumu v Haoh singles match, and things seem to be heading towards a STINGER vs Kongoh Juniors conflict, especially as Nioh was the one sitting and looking at the winners.
MATCH FOUR
Kaito Kiyomiya, Yoshiki Inamura, Mohammed Yone & Shuhei Taniguchi vs Kongoh (Kenoh, Katsuhiko Nakajima, Masa Kitamiya & Manabu Soya)
"Insanely good"
"Happy Vertical Spike to you"
Kenoh had said that he was going to be cautious, and not just when he went to the ring, during the match and when the match finished, he was going to be on his guard from the moment he entered the arena. So when Kenoh stalked out looking unimpressed, and not in the mood to be messed with. It was noted that Kenoh was glancing around him when he walked to the ring, and then he noticed a familiar figure sitting at the timekeepers table.
A figure that was wearing a very familiar mask.
Kenoh, who for once was justified in his paranoia, went over, and yelling lent over the iron barrier and grabbed the figure. He then realized that this wasn't Kendo Kashin...this person was bald, and it was Mr Orange, the Noah bus driver, who somehow had ended up as a decoy.
Kenoh took his anger out on Yone, who got kicked around on his birthday. Yone's disco was not appreciated by Manabu Soya, who glowered at him before kicking him. Kaito Kiyomiya probably found the match strange, as Kenoh was mad as someone other than him.
Katsuhiko Nakajima had fun kicking around Yoshiki Inamura, and then was told off by Referee Nishinaga who said loudly "Nakajima!" when he did his Shutter Chance. Not that Nakajima took any notice, except to turn his head.
There was no dancing from Shuhei Taniguchi today apparently. He had four opponents to slam in succession, and as two of them were on the heavier scale of the heavyweights, they exhausted him and he fell over.
WINNER: Katsuhiko Nakajima with the Vertical Apike on Mohammed Yone (20 minutes, 25 seconds)

At the end of the match, a mysterious man in a white mask, stormed the ring and attacked Kenoh. He was driven off by Masa Kitamiya and Manabu Soya (Nakajima naturally didn't stick around), and attempted to fight back by wielding the GHC National belt. He was eventually shoved out of the ring by Kitamiya. Kenoh got on the microphone long enough to growl "Who are you?", and then a string of expletives followed.
We didn't have to wait long for the mysterious masked man to tell us who he was, as he claimed he was Kazushi Sakuraba, and even showed the camera he was wearing Sakuraba's blue MMA fight shirt. He also claimed that he had come to Maebashi today at the request of Takashi Sugiura. Sugiura's response was to thank whoever it was (he like everyone else knows it's Kashin), for coming today and saying wearily that this was making him tired. Somehow, I think the strange masked men (unless you count Kashin himself), will not be appearing at Korakuen Hall tomorrow.
MATCH FIVE
Go Shiozaki & Momo No Seishun (Daisuke Harada & Atsushi Kotoge) vs Naomichi Marufuji & FULL THROTTLE (Seiki Yoshioka & Hajime Ohara)
"I wonder which chest will be the brighter red?"
The focus on this match was between Atsushi Kotoge and Seiki Yoshioka, especially as the two heavyweights where engaged in their endless "Chop Competition", this time on each other. Kotoge and Yoshioka had an intense fight, with Kotoge's bump when taking Yoshioka's "Code Breaker", earning praise from the fans.
Go Shiozaki was seen to be supportive of Kotoge, especially when Kotoge was on the receiving end of their opponents, and it also looked like at one point, Kotoge rearranged one of the bandages on Shiozaki's arms.
WINNER: Atsushi Kotoge with the Killswitch on Seiki Yoshioka (24 minutes, 16 seconds) 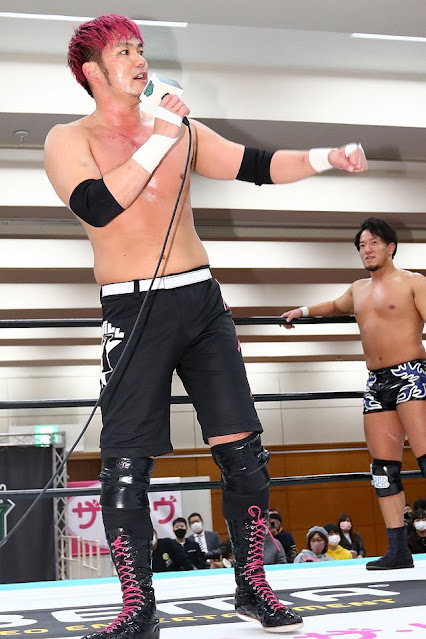 After the match, Atsushi Kotoge was the one to make a speech on the microphone to close out the show. This unusual as he is a junior heavyweight, and not a champion. Kotoge thanked everyone for coming and told them to take care of themselves, especially on their journey home.
It looks as if Momo No Seishun are actually thawing, as Daisuke Harada acknowledged his old friend, fellow Osaka boy, and tag partner as "a fighting spirit who never breaks, no matter how much is done to him". But that wasn't all, Kotoge somehow got both Go Shiozaki and Daisuke Harada to raise their arms together.
With thanks to: Kai, Nacky, Rembrandt_kbsm, Naoki_Slam13, Nomusan, Far Flower, Starmoon72, *Nacky*, Shina0707, Maguro
GIF & Picture credit: Noah GHC Official Twitter, PKDX, Daisuke Harada
Noah's next show: 24th February, Korakuen Hall.

(NOAH) HOW TO WATCH PRO-WRESTLING NOAH