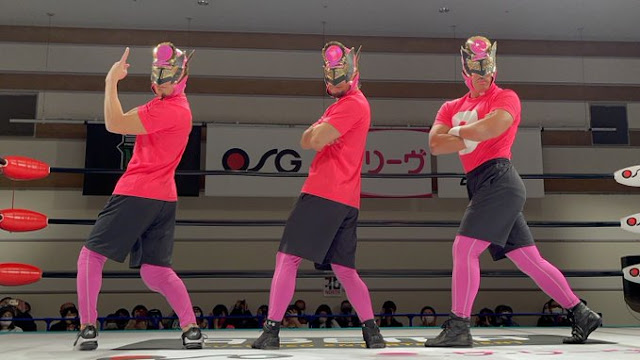 "There is no doubt that today will be an event with more smiles than usual. Let's have fun!"
NOAH GHC
Noah started their weekend in Yokohama with THE FULL THROTTLE produce. An event produced by juniors and with a mostly junior card, so you can imagine what was going to happen.
Masao Inoue and Junta Miyawaki both made their returns to Noah today; Miyawaki from having appendicitis, which had sadly caused him to miss Noah's Budokan event, and Masao Inoue returned from having Coronavirus. It is also his 51st birthday, and Go Shiozaki had a special present for him, as Inoue had run out of the nice red chest he had been given at New Years.
Fans who came to the event found that although the merchandise stall could only sell limited goods, the new YO-HEY hats were on offer, and as they left they were given a small towel with an image of one of THE LEAVE masks on it.
Today's event will be broadcast on WRESTLEUNIVERSE on the 9th March, you will need to be s subscriber to view this.
MATCH ONE
Yasutaka Yano vs Kai Fujimura
Winner: Kai Fujimura with the Boston Crab submission on Yasutaka Yano (5 minutes, 44 seconds)
MATCH TWO
NOSAWA Rongai, Ikuto Hidaka & Kotaro Suzuki vs The Leave Mask 1, The Leave Mask 2 & The Leave Mask 3
The three LEAVE MASKS (YO-HEY 1, Seiki Yoshioka 2, Hajime Ohara 3, and as we shall see later there was a 4th one), came to the ring to "Cruel Angel's Thesis" from Evangelion (which YO-HEY started singing loudly in the main event for reasons known only to himself). Before the match started, The Masks huddled in the corner, linked arms and then span round as they discussed something, their heads bent together.

The match was a fast paced Junior one, with Kotaro made into a surfboard as two of The Masks held his arms, and one of them (YO-HEY) surfed on his back. NOSAWA broke this "LEAVE Tower" down, and later in revenge tore the mask off of LEAVE MASK 1.  YO-HEY screamed, and the ref told him to put it back on.
WINNER:  YO-HEY with the Boston Crab pin on Ikuto Hidaka (12 minutes, 13 seconds)
NOSAWA'S team wasn't finished yet, they stripped THE LEAVE MASKS of their masks, and then were jumped by The Kongoh Juniors (Tadasuke, Haoh and Nioh, who by the way weren't on the card), who came in to beat up NOSAWA. Tadasuke telling NOSAWA, "You guys underestimate us too much. Tomorrow is not enough."
Hajime Ohara, not pleased with this intrusion, and using untypical language for himself, declared war on Kongoh saying "Hey, Kongoh! They aren't your only enemies! We, Full Throttle, are too! It's a full scale war, assholes!"
MATCH THREE
Kinya Okada vs Kenoh
Kenoh entered looking apprehensively around him, and then remained nervous throughout the match, even after he made Kinya Okada quit.
WINNER: Kenoh with the Ankle Lock submission (7 minutes, 14 seconds)

Kenoh, pacing around and looking around him, said angrily on the microphone, "Hey! Kendo Kashin! I know you are there somewhere!" After continuing angrily about being scared of the title match tomorrow, Kenoh had just put the microphone down, and turned around to see a LEAVE MASK 4 standing behind him. LEAVE MASK 4 beat him down, and then left with some merchandise.
And then later claimed to be Hajime Ohara.
No one at all is or would ever be fooled by this. Ohara is too well behaved.
MATCH FOUR
Masao Inoue, Akitoshi Saito & Shiro Koshinaka vs Yoshiki Inamura, Kaito Kiyomiya & Go Shiozaki
Masao Inoue's 51st birthday was marked by a gift from Shiro Koshinaka, who helped him beat up on Yoshiki Inamura (who fans noted was heavily taped today), but as we know, Go Shiozaki had another gift for him. Inamura it seemed was the main target of the opponents, although he did manage to knock down Akitoshi Saito, Saito later removed the mats from outside the ring and with help of Shiro Koshinaka, gave Inamura a piledriver onto the concrete. Koshinaka would later perform a hip attack on all three of his opponents from the apron.

Unsurprisingly, Inoue hates wrestling Shiozaki, and almost ran away from him. However, the only place Inoue could run was into the corner (he's not quick enough to get out of the ring), where Shiozaki gave him the machine gun chops, and then dragged him up by the ears when he fell. Inoue screaming, "Don't touch me" had no affect, and fans that the sounds of the chops sounded very loud, neither did his begging Shiozaki to wait work, as Shiozaki took him down with the Gowan Lariat.
WINNER: Go Shiozaki with the Gowan Lariat on Masao Inoue (19 minutes, 25 seconds)
MAIN EVENT
Momo No Seishun (Daisuke Harada, Junta Miyawaki & Atsushi Kotoge) vs FULL THROTTLE (YO-HEY, Seiki Yoshioka and Hajime Ohara)
Tonight was the final pre-match between Atsushi Kotoge and Seiki Yoshioka, who will clash on the 14th March in Fukuoka for the GHC Junior Heavyweight title, and as he is the champion, FULL THROTTLE came out to Yoshioka's theme.
The fast paced and "insanely fun" main event, was characterized by Yoshioka kicking Kotoge, YO-HEY babbling "I forgot my mask", and Junta Miyawaki standing up to his more experienced opponents (including Hajime Ohara, one of his teachers). Miyawaki endured YO-HEY'S chops, and then took out FULL THROTTLE by repeated dropkicks. The fans made a tremendous noise by stamping their feet and clapping loudly.
The match ended with a massive headbutt from Kotoge on Yoshioka. Yoshioka crumpled and fell to the mat, and did not move, with Kotoge having a forehead covered in blood. Fans described the sound as "dull" and "ugly".
WINNER: Atsushi Kotoge headbutted Seiki Yoshioka (22 minutes, 40 seconds)
Hajime Ohara spoke on the microphone to say basically that the event for FULL THROTTLE didn't go as planned, but life is tough. The battle would not stop, and with this defeat as food for thought, he will go even further with the Noah Juniors. So please provide support.
So, that's Mui Bien today as Hajime Ohara left to his theme, and looking forwards Noah in Yokohama tomorrow with the return of "Great Voyage".
WITH THANKS TO: Fujiwara_Armbar, Kei, Abeshin, Tahtaunwa, Metal Noah
GIF & Pictures taken from the official Noah Twitter
Noah's next event: Sunday 7th March 2021, "Great Voyage in Yokohama".

(NOAH) HOW TO WATCH PRO-WRESTLING NOAH