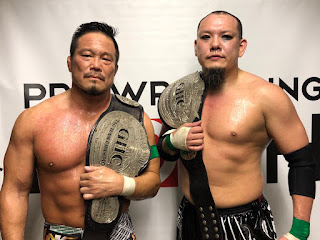 VS Axiz
On the 13th June 2019 after the main event in which they won the belts from AXIZ, Sugiura and SAKAMOTO were surprised to see Katsuhiko Nakajima (supported by Go Shiozaki) come limping into the interview area.
They wanted a rematch.
Nakajima asked Sugiura for one saying he knew this was unusual, Sugiura surprised at how polite Nakajima was being, granted it but warned him that this time he wouldn't choke him out, he would either be screaming to tap out, or else he would pin him.

The title match was held on the 27th June at Korakuen Hall (it was in the main event as the GHC Heavyweight was not being defended). KAZMA SAKAMOTO and Go Shiozaki tended to take a smaller backseat in this as the main drama was between Takashi Sugiura and Katsuhiko Nakajima. Nakajima, while not as humble as some people had thought he would be (especially after how he had asked for a title match), was not as cocky as he had been in past title defenses, and was more focused. His endurance (which had cost him two title matches against Sugiura) was also put to to the test, and he refused to submit to the ankle lock which had again cost him dearly in important matches.
After a grueling battle between the two teams, it took three kicks to the face and the Vertical Spike with long airtime for Katsuhiko Nakajima to put Sugiura away for the three count.